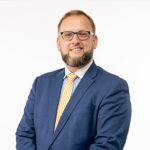 Justin Biggs is serving his first term on Knox County Commission having been elected to represent the citizens of Knox County At-Large in the August 2018 election.

Justin is a sixth generation East Tennessean who has been a life-long resident of Knoxville.  He and his wife Heather and daughter Lilly Ann reside in Halls.

Commissioner Biggs currently serves on the finance committee, the cable tv committee, insolvency board, code commission, arena use, and his colleagues elected him to serve as vice chair of the court subcommittee as well as on the Tennessee Technology Corridor Development Authority.