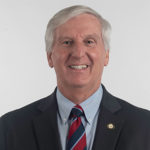 John Schoonmaker was appointed to the County Commission on January 12, 2015. He was elected to serve his 1st term in August 2016. John’s professional career includes over 40 years in sales, marketing and business ownership in the furniture and sporting goods industries.

On Commission, Schoonmaker is Chairman of the Finance Committee, Chairman of the Legislative Affairs Committee and serves on the Knox County Investment Committee and Audit Committee. John is very involved in the TN County Commissioners Association and serves on the Governmental Affairs Committee. Through his legislative efforts he filed with the TN Legislature his first piece of statewide legislation. The bill is designed to reduce a service fee to save Knox County, Town of Farragut and the City of Knoxville combined over $1,000,000. a year.

Commissioner Schoonmaker has been a resident of the 5th District for 35 years. John and his wife, Heather, have been married for 40 years and they have two children, Laura and Justin. They live in the Tan Rara Oeste neighborhood.