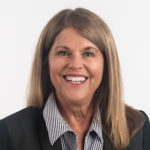 Terry Hill is serving her first term on the Knox County Commission having been elected in the August 2020 election. Prior to this Terry served as past Chairperson and Board member on the Knox County Board of Education from 2014-2020.

Terry earned her Masters degree in social work from the University of Tennessee. She retired after 30 years as a clinical social worker and Lead Consultant with Knox County Schools. She has contracted as an expert witness with the United States Department of Justice Medicare/Medicaid fraud division, medical and home health, employee assistance programs and private practice. She has taught as an adjunct instructor at UT Knoxville, Tennessee Wesleyan College and was a graduate field supervisor for the UT College of Social Work.

She served as past Chairperson and Board member of the Tennessee Health Related Board of Social Work Licensure, a Governors appointment. Some of her more recent service includes active participation in the FBI Citizens Academy, Honor Air Escort, Karns Community Club, Karns Republican Club and Grace Baptist Church.

Terry has two daughters, Cindy Buttry and Jackie Cody and three grandchildren that keep her running between schools and ballgames. Her husband Steve retired from St Mary’ Medical Center as their government and community affairs liaison and remains active in community endeavors.